Connecting and Communicating Through Touch and Telepathy to the Gray Whales 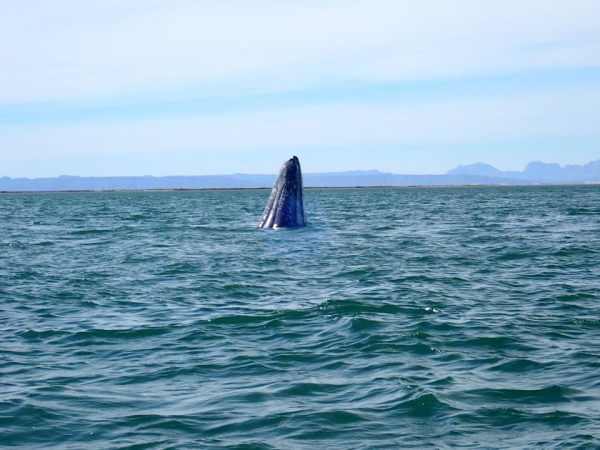 My visit to the gray whales of San Ignacio Lagoon March 2 through 6, 2018, allowed me to be physically close to whales in a way I didn’t know was possible. Their energy was peaceful, soft, and diffuse. They are neither prey (except for Orcas) nor predator. They reflect what we give them. In times past, they were known as devil fish because would attack ships and boats that tried to kill them. Now they are non-aggressive. A few will approach boats with their babies and invite touch (and even a kiss).

Those that come to the boats act as ambassadors, saying, “See? We are no threat to you.”. Communication with them is possible and can be profound, but they are not necessarily interested in connecting. Their world is separate from ours and they are good with that.

My Conversation With a Gray Whale…

What is your job? 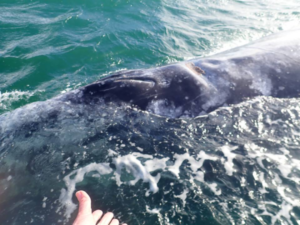 Just to be, that is enough. We are non-competitive and gentle on the land.

How can you give such specific messages to people? Your answer seems to require much more information about the individual than you could possibly know.

We are aware of your motives. We communicate telepathically which allows us to see much more than you intentionally send us. From this information we formulate an answer.”

Do you have a message for the people I talk to?

We want everyone to know we do no harm.  We eat creatures that live in the sand.  We churn the ocean floor like worms till the soil.

Is there anything more?

Leave us alone. You do not have to know everything about everything. What good does it do to track us? (Scientists have used suction cups and satellite tags to try to track the whales. But the suction cups fall off and the tags harm the whale.)

We want to be sure your environment is safe, and you have everything you need. 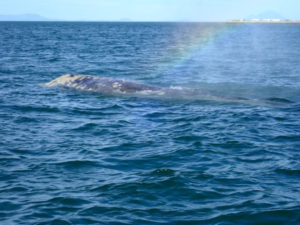 I don’t think that is the main motivation. The more you know the more you could hunt us or kill us. it works both ways. What you say will help preserve us could also be used to help destroy us. Some of us try to show you that we are no threat, but we know you count us and pursue us with your curiosity which can be quite invasive. You are still operating from the idea that man has dominion over animals. This is a very harmful concept. Live and let live is better. This world is not about mankind. This world is about every kind. We respectfully ask that you honor our species. Let us coexist in peace. Do not catch us in your nets or destroy our feeding grounds or our birthing grounds.

Thank you for contacting us and for coming and learning more about us. It is sad that for us to live there must be an economic benefit to people and we could die if humans thought our flesh was more valuable dead than alive. Or that our birthing and feeding grounds were more valuable for other purposes for humans than we are valuable as living beings.

This trip was with Baja Discovery and lead by Mary J. Getten, animal communicator.

Whale protection: A small area of San Ignacio Lagoon is designated for whale watching. Only 16 small boats are allowed in the waters at one time and only two boats can be near any one whale. Whales are not chased. The whales could easily swim away or dive out of our reach, but some choose to engage with humans. 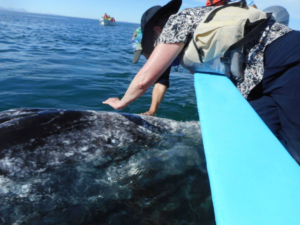 Touch: Gray whales were known as devil fish for years of hunting because they would attack the boats that hunted and injured them and their calves. Local fisherman avoided the whales or scared them away when they came too close. Touching the gray whales in the lagoon began in 1976 when a gray whale approached a local fisherman’s boat. Instead of scaring the whale away, Francisco Mayoral reached out and touched it. Each year a few more whales approached the boats and more people began reaching out to them. Whale mothers brought their calves to the boats to explore the motors and people. About ten per cent of the whales are believed to be friendly.

Census: Gray whales were hunted to extinction along the Atlantic coast and almost had the same fate on the Pacific coast of North America. In 1946, the International Whaling Commission gave them protection. In 1973, they were added to the Endangered Species Act. The whales rebounded and in 1994 were removed from ESA. Ten years ago, the estimated gray whale population was estimated at 19,000.

Social habits: Gray whales are solitary, though they do travel up the coastline in loose groups. Calves nurse for 9 months. Females are sexually mature at 8 years.

Characteristics: Gray whales grow to 40 to 50 feet in length and weight up to 30-40 tons. Average life span is unknown but is believed to be 40-50 years and possibly up to 80 years. Females have a calf every 2 to 4 years. Eyes are located at the end of the jaw, so the whales can see the bottom of the ocean. Gray whales sift the sand they plow off the ocean floor through their baleen to obtain their primary food—arthropods. Orca whales are their only enemy other than humans.

Migration: Gray whales migrate 5,000 to 6,000 miles along the coastline from their wintering
and birthing grounds (January-March) in Baja California Mexico to their feeding grounds in the
Bering Sea (June – October).