From Grief to Healing

This is part 2 of this 3 part article,  in it I share the account of the months before and after my partner Lloyd’s death in the hope that it may be helpful to others whose lives are ripped apart by the death of their spouse. Today we talk about….

The process of moving forward.

The cancer rate was high in the grief group I joined after Lloyd’s death, perhaps due to years of caretaking, perhaps due to many of us not caring if we lived or died. When Marla developed a suspicious spot on her lung, she declared it a gift. She took to her bed, stopped her Parkinson’s and heart medications, and died within the month. I was angry that she didn’t choose life; instead she chose to join her deceased husband. For her, death was not the enemy.

I was determined to live. I knew Lloyd didn’t mean for us both to die. But how to live? The love of my life was gone forever. I had no interest in work or anything else. The past sucked me backward into grief and despair. I tried to find meaning in Lloyd’s untimely death and in my drastically altered life.

Vaughn, also a member of my grief group, was diagnosed with terminal cancer and given three months to live. At the same time, his younger sister, Jane, a long-term dialysis patient, decided treatment was too onerous. She was ready to quit. She invited her extended family to one last party, knowing without dialysis she would live only five to seven days. Vaughn wanted to use his sister’s gathering to tell his family that he too was dying. He asked me to come with him for support.

Jane hosted a splendid reunion, full of laughter, pictures, and family memories. She skipped her dialysis appointment that afternoon and that evening refused her medications. When Vaughn and I arrived the next morning, Jane was lying on a small rug in front of the kitchen refrigerator in extreme agitation, spewing angry accusations. A hospice nurse sat at the kitchen table, her notebook open in front of her. She informed the family that hospice could not get involved because Jane was experiencing a psychotic break. She recommended they call 911. With that, she closed her notebook and left. 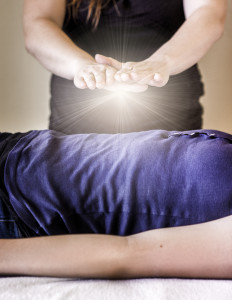 Vaughn and his brother picked up the corners of the rug Jane was lying on and used it to carry her to the living room couch. I sat beside her and spoke softly of a beautiful beach in an attempt to use a guided imagery method I’d heard thirty years ago. Eventually Jane calmed enough to be coaxed to her bedroom. I closed the door and continued to talk to her in a low, soothing voice. As I talked, I felt an overwhelming compulsion to hold my hands about six inches above her body and move them slowly from above her head to below her feet. I did this three or four times; I don’t know why. It just seemed like the thing to do.

Jane relaxed immediately. She whispered that it was like “going to Nirvana.” She fell asleep and I tiptoed out. The next day, Jane asked her family to call me. I went into her bedroom and closed the door. Jane shared bits of her life and writings with me. When she tired, she asked me to run my hands above her body like I had before. As I did this, she drifted into sleep. Seeing how my presence calmed Jane, her daughter asked me to come visit every morning and evening. I always saw Jane alone with the door closed. I didn’t want anyone to see the strange motions I made.

Five days later, hospice was involved. Pain medications were ordered and would be available the next day. An aide came and bathed Jane, but it didn’t go well. When I arrived, Jane’s mouth was bleeding from biting her cheek. Her arms were clutched tightly against her stiff body. With death imminent, I invited Jane’s family to gather around her bedside. They watched as I moved my hands over Jane’s body from above her head to below her feet, slowly repeating the motion until she calmed. I slipped out to leave Jane with her family. She died peacefully an hour later. The next day, Jane’s daughter sought me out to ask where she could learn to do what I had done. I had no idea; I didn’t know what it was.

In part 3 of my experience, I’ll share about healing through finding gratitude.