By Wanda Buckner on August 2, 2016 in Animal Communication, Animals, horses, Past Life Regression, past lives 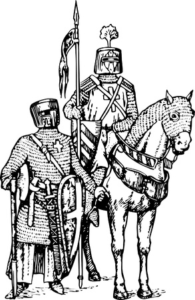 (To listen to this reading you may click on the audio player below. This section begins at 4:54 in the audio. Follow the audio using the transcript.)

This post is from Red, who was a warhorse in the lifetime described. He tells his person, “All fighting isn’t bad. Fighting can be fun, it’s exhilarating to have a strong body and to use it to the ultimate degree. That is deeply satisfying. The greater the risk, the greater the satisfaction.” Red’s purpose in showing this life was to explain to his person how people can feel that way and remind her, at one time, she also felt this way.

Looking back in past lives, the first thing I see is Red as a war horse. And war horses were treated well in this time period when horses in general were not treated well because war horses were highly valued. And they needed to be strong and  hearty and healthy. And they wore armor and the knights on them war armor so they had to be large.

In this lifetime you also were a knight, a warrior wearing the armor and you and your horse were a team. You both enjoyed the fray. There was all this training and then play kind of stuff, the fake fighting where no one was supposed to get hurt, but in reality, you know, people could get hurt. And I see you and the horse travelling across a desert, are with a group of soldiers. It’s very, very bad travelling circumstances. There’s not enough water. There are knights who are dying and left in their armor because you can’t carry anymore. It’s very grueling, but you both survive and are even more of a team than in the past. And you’re both getting older. And you’re achy from old war injuries and Red is achy from old war injuries. And Red keeps working because he’s a strong horse who can carry things. Even though he can’t be a war horse anymore, he has a phenomenal constitution and he carries burdens. A lot of things were done with the horse power so he continued to serve an important part. And you two didn’t get to live as closely anymore because he continued to work and you had to “retire.”

And I see you farming, but the best days of your life, the days that you tell your children and grandchildren about, are the war times and the excitement battle and the bravery of Red. And how you two enjoyed it so much. It was the highlight of your life. All the danger, the adrenalin pumping, and the blood, and the smells, and the crash and clang. It was also, it was odd. It was that feeling of tremendous exhilaration coupled at the same time with tremendous loss, with pain.  It was hard to get your mind around it in a way. It was just the cost of war. Young men dying in their prime. Horses having to be killed because they had been injured. It was a much more physical time. It was, a, people died all the time. It wasn’t that unusual. And dying in battle was a glorious, absolutely glorious. And your life afterwards seemed kind of pale by comparison. Most of the people who rode with you at the time died earlier. And you don’t know why you continue to live. Your life with Red drifted apart. But the two of you always remembered those glory days.

When asking what is the relevance for this time of life, for Diane’s life today, what was the purpose of this life time? What I’m hearing is that all fighting isn’t bad. Fighting can be fun, it’s exhilarating to have a strong body and to use it to the ultimate degree. That is deeply satisfying. The greater the risk, the greater the satisfaction. It was, the purpose was to help Diane understand, in this lifetime, how other people can feel that way. For her to remember that. . . to have no judgment about people who live their lives that way. Who love the adrenalin rush, love the danger, love the risk. The higher the risk the better. The greater the victory the better. And it’s a reminder that at one time, she too, enjoyed this kind of a life and loved it and lusted for it. Whereas in this day and time it seems so. . .she is living in a way that has actually turned this 180 degrees. It’s a reminder not to forget the pull of another way of life.