By Wanda Buckner on August 10, 2016 in horses, Past Life Regression, past lives 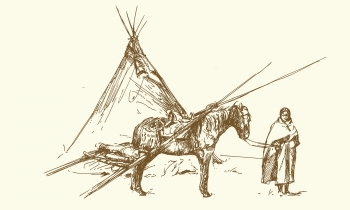 (To listen to this reading you may click on the audio player below. This section begins at 12:30 in the audio. Follow the audio using the transcript.)

This post is a continuation of the reading with Diane’s beloved horse Red, who is a stallion in this life, and later a mare. Diane is a female Indian. And so the message in this life is about being in the present and appreciating the small things…It was a calm life. There wasn’t much excitement in great contrast to the other life. And the purpose of showing this life is to show there is great satisfaction in an ordinary life, where nothing spectacular happens. Life just goes on. Life just happens.

And I’m seeing a horse pulling a travois, the two poles with a skin between them to carry burdens. It’s a nomadic Indian group. I’m looking for where they are, I was assuming North America, but it looks like possibly South America. This [North America] couldn’t be the first people who used that method.

And so, once again, Red was a valued horse. I thought male, but as I look. . . I’m going to look a little more closely here. And so I’m actually getting two lives here, one is male, as the stallion, and one is female. And they are in the same group. And as a stallion he is known for his fire and his temper and he’s valuable for breeding others because of his strength. And I’m asking if these occurred simultaneously and I’m being told no.

I get that they didn’t keep many stallions. They did geld them, even in those early, early days to decrease fights and to . . . . Interesting, the group was very sophisticated in their use of horses. And the horses had different jobs, it was stratified. The horses worked even when they were fully pregnant. You had to be strong to survive. And there weren’t a lot of horses. Not everyone got to ride. A few men rode: the young, the strong, the really supple, but most of the people walked.

The mares were used to pull. And they were also ridden too. They didn’t have the aggression of the males though, except I’m seeing some fights among them. Certainly more aggressive than the horses we see today. Quite feisty there. I see them as much smaller. The people were also much smaller though. 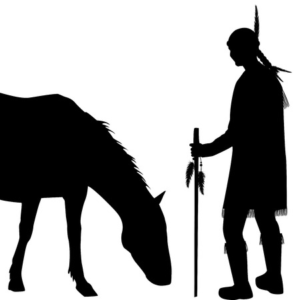 And I’m asking about this life. And so, Diane, I’m seeing you as a female, Indian, short, stocky like the people are. Black hair. It’s an interesting life. There is some wealth, but it is not evenly distributed and it’s not it’s not about the food or housing. It’s the wealth of decoration and ornament. So the king, the leader, has finer, beaded garments and bands. The shaman has finer ornamental finery that he wears for ceremonial purposes.

But in general, it’s a nomadic group, not very large, that moves from place to place to hunt and harvest. And so, when they marry, they marry outside of this group, and women come into the group from others. And so I’m asking if you have a personal relationship with Red. And I see [Red] as a mare, I see this deep appreciation for helping carry things because when you’re tired you can put it on the travois (and I see the word t-r-a-v-o-i-s). And he’ll. . .I’m asking if that’s really a mare or a gelding? Unclear, and he’ll carry it for you. More of a mare, ah,  and then there’s the foal. And you love the foal. Love that foal.

So tell me, what is the purpose of this life that’s relative to Diane’s life today?

And so this life is about being in the present and appreciating the small things, like Red being able to carry the extra burden, the sun and the stars and the adequate food. It was a calm life. There wasn’t much excitement in great contrast to the other life. And the purpose of showing this life is to show there is great satisfaction in an ordinary life, where nothing spectacular happens. Life just goes on. Life just happens.