(To listen to this reading you may click on the audio player below. This section begins at 20:45 in the audio. Follow the audio using the transcript.) 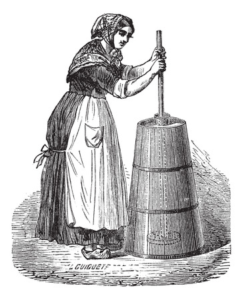 The message of this past life that feline Princess shows Diane H. is that there’s plenty of time for the world that comes next. She says, “You’ll be there soon enough. There’s no rush. To be here now, soaking in the revelations that are available on this earth and through living things.”

Alright. So just asking if there’s a third life that you would like to share with Diane. So Princess comes forward again. I’m not seeing anything. So. And I’m seeing a pioneering woman, very plain dress, brown with a white collar. Reminds me of the Puritans. On the East Coast. It’s cold; it’s blustery. And I see you again as a female in this life, churning butter, you know, with a, like so [gesture]. It’s a very plain life. I don’t see decorations. It’s a, those things are considered ungodly.

I don’t see softness. Everything is utilitarian. I don’t see color. It’s all very brown and grey. And it’s, art is not valued. Any kind of decoration is considered sinful and self-aggrandizing. And any kind of attempt to improve how you look or have your hair in an attractive style is considered again sinful and being against God and about being, you know, attractive to men. It’s very suppressing of sex. Having large breasts is considered shameful, even though it’s no fault of the girl, because it’s so sexual.

The animals, even their mating is considered, that’s considered what separates the animals from the humans in that humans can suppress their carnal desires. They’re not like the animals, going out and mating with whoever. It’s a very strict and very oriented to the life away from this life. To the lives beyond. To the spiritual life. To uh, nuns and priests, they are considered to have the highest spiritual lives because they do not engage in their carnal desires. And they take a vow of poverty and they refuse all comforts and wear clothes that are itchy and scratchy and allow themselves to be cold. Don’t take care of themselves because they don’t want to give in to the body’s impulses.

And so one’s pleasure is supposed to come from the, the spiritual life. The connection with God, who’s a punitive, patriarchal God, who makes judgments and punishments and, and the people through their church also make judgments and punishments. And the father is the head of the household just like the Father in Heaven is the, is the head and so women are expected to conform to what the man wants and to defer to him on all things. Just as the Father in Heaven is the head of heaven and so the father in the household is a head of the house.

And because your life is difficult with a lack of personal expression of your unique personality and abilities. There’s no room for anything new in this community. You strive to have a connection with the divine. Cannot manage it. So the way to connect with the divine is to be on your knees, at a bench, praying, and connect through some mental process and theoretically through your heart. But the way you connect with the universe is, again, it’s through flowers, plants, and animals. And this is your entry into the divine, through something very concrete. 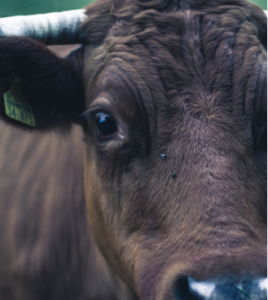 When you look in the cow’s brown eyes with the long eyelashes, there is a peace that comes over your soul that is not possible praying in your community, as you list off all of the things that you did wrong and what you could have been better, done better and you swear that you will do better next time and it’s this. . .. And you never feel forgiven. You never feel accepted. You always feel like you haven’t done enough. And you know that you are not connecting. But you can’t say that. And so instead you say, I think so. I must be. Because you’re well thought of, but you’re not happy.

Because you feel there’s something deeply lacking in you that like other. Other people are speaking in tongues and you just . . . . And other people are, you know, their hands are up and singing and praising God. And you pretend, but really you’re not feeling anything. And you cannot discuss this with anyone, except maybe the cow, the chickens, and the birds. 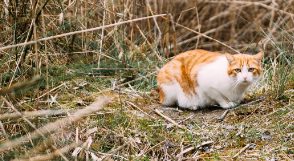 I do see a cat again on the outskirts. but again it’s not a close relationship. It’s. . . the cat is very fearful. And I see both TB and Princess there. But they, they don’t come out. They hide. They are, it’s like they’re not really supposed to be there. If anyone saw them, they might shoot them. And so they’re very skittish, very wild. That’s where there’s food. So they hang around. And they’re very much watchers. They watch the people and they come to predict when, when the people will come and put out grain. I see what the problem is there. Not only do the cats catch the mice and the rats, they also, they also kill the baby chickens. Everyone gets very mad at that.

And so I’m asking for the, what is, what is the purpose of showing this? And the answer I get is that the purpose is to let you know that your connection to the universe is through the physical, the beauty of the natural world—the unspoiled naturalness of animals. And this is where your connection comes through these. Because with animals, with flowers, you have a heart to heart connection and there’s an emphasis on being in this world.

The message is that there’s plenty of time for the world that comes next. You’ll be there soon enough. There’s no rush. And to be here now, soaking in the revelations that are available on this earth and through living things.

And then I’m asking about rocks and crystals. And I get, yes, there’s a connection there too. The wonder of, the wonders of this earth would never be fully fathomed. There is much to learn, that all of these are access points. And I’m seeing a crystal. It’s shaped like the quartz crystals are but it’s not quartz. I don’t know what it is. It’s an access point. 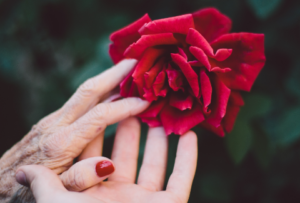 And it reminds me of when I told people I had psychic envy. That all these people could do all these things that I couldn’t do and that I wanted to do, and I called it psychic envy. And, and what I hear is there are people who wish they could do what you do. But that this is beside the point. That owning how you do: this is how I do it and recognizing it’s unique to you and a special gift. That we all have our ways of touching the divine and one person’s way is not another’s. And no way is better than any other. And that, as you are is very spiritual and you are well connected.

And I am asking the purpose of this life. I’m hearing that the purpose of this life is to let you know that now you have the freedom to connect spiritually in the way that works for you and that is best for you. And that you can connect in as many ways as you choose to; but not every way is the ideal way. And it’s not about seeking. It’s about allowing.

I’m asking if there’s anything more? No. Is there anything you want to tell Diane? And they say we loved her dearly and Neil too. We were meant to be there. We know that. TB appreciates all the years he had. And princess says she appreciated the extra treats when TB was ill. (laughing) And they loved the times in the morning. (Diane spent an hour every morning giving TB fluids, playing soothing music and diffusing oils for many months before TB’s death.) And that was deeply spiritual and that is the time when you were most at peace and in stillness yourself; being in the moment with them. And that if you had not been giving TB the, the water bolus, the bolus of whatever he needed, that you would not have taken that time. And so that was his gift to you. And it was a gift for all of you.

Now I’m asking if there’s anything else. They say, “No, we’re just filled with love.” And they will see you in the next life. And so I’m telling them that you love them very much. They say, “We know that. There’s no need to say anything.” And they also say that they are present. And that any time you want to talk to them feel free. They’re very funny. They’re like, but you know we’re not deep thinkers here. (laughter) We’re like in the moment. We don’t have the answers to life. We have the answer to Now. (giggling) Now is to be here now.

Very lovely. Well, thank you very much TB. Thank you, Princess. We appreciate you talking to us.

Part 2 Learning From Past Lives
Life After Earth Life